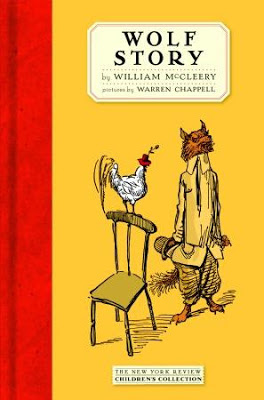 «One night in 1947, an intensely curious 5-year-old boy named Michael McCleery asked his father for a story. So his father, William McCleery, produced a tale that revolved around a wolf named Waldo, a hen named Rainbow, and another little boy, the son of a farmer, named Jimmy Tractorwheel. Over weeks and weeks, William serialized the story, telling it in installments to Michael and his best friend during bedtimes and Sunday afternoon outings.

But William wasn’t just a dad — he was also a Broadway playwright. And, together with the artist Warren Chappell, he turned that elaborate wolf story into a short book for children. The resulting Wolf Story was acclaimed when it came out in 1947, but it’s been out of print for decades. Now, the New York Review Children’s Collection has reissued it.» (Listen to the whole story about the story here on NPR.)
Wolf Story by William McCleery with pictures by Warren Chappell. Such a cool book, and such an amazing dad. All you have to do to win a copy of this family heirloom of a tale is comment on this post between now and midnight (CT), Sunday, December 9. A winner will be selected at random and announced the next morning.
Only one more day in the give. Don’t miss it!
Day One was No Kiss For Mother by Tomi Ungerer. Enter to win here.
Day Two was Pippi Moves In! by Astrid Lindgren. Enter to win here.
Day Three was The One & Only Shrek on CD. Enter to win here.
————