I got so caught up in life last week that I never got to finish out with Thingummery‘s guest posting. Read her blog. Shop her Etsy shop. And imagine spreading your patagium and taking flight!!! Happy Saturday then! 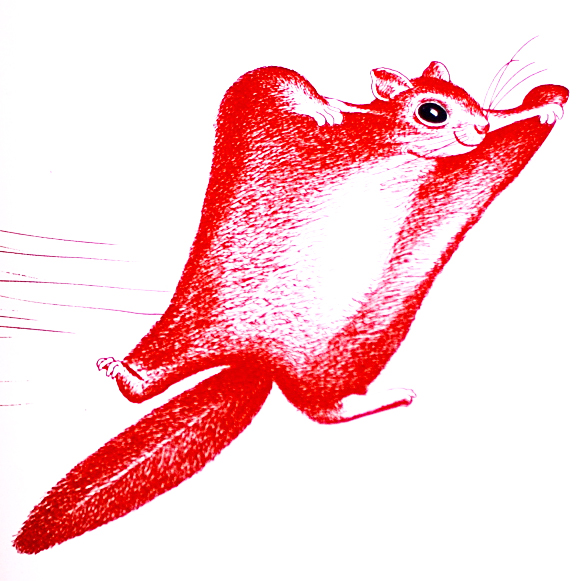 Tony Palazzo ~ The Junior Literary Guild and the Viking Press, 1951
I’m going to make a sweeping statement without trying to confirm its accuracy: I don’t think there have been a lot of children’s books about flying squirrels. Okay, if there are other flying squirrel books out there, I can’t imagine they’re half as marvelous as this one, written and illustrated by Tony Palazzo in 1951. Palazzo appears to have been a pretty prolific illustrator in the ’40s and ’50s (Google around for copies of Susie the Cat, which looks awesome—I’m definitely going to be on the hunt for it for my two cat-fancying kids). I love the way he plays with type, making it zig-zag across the page like a scampering squirrel. And his two-color illustrations are singular and totally beguiling, to my eye, anyway. 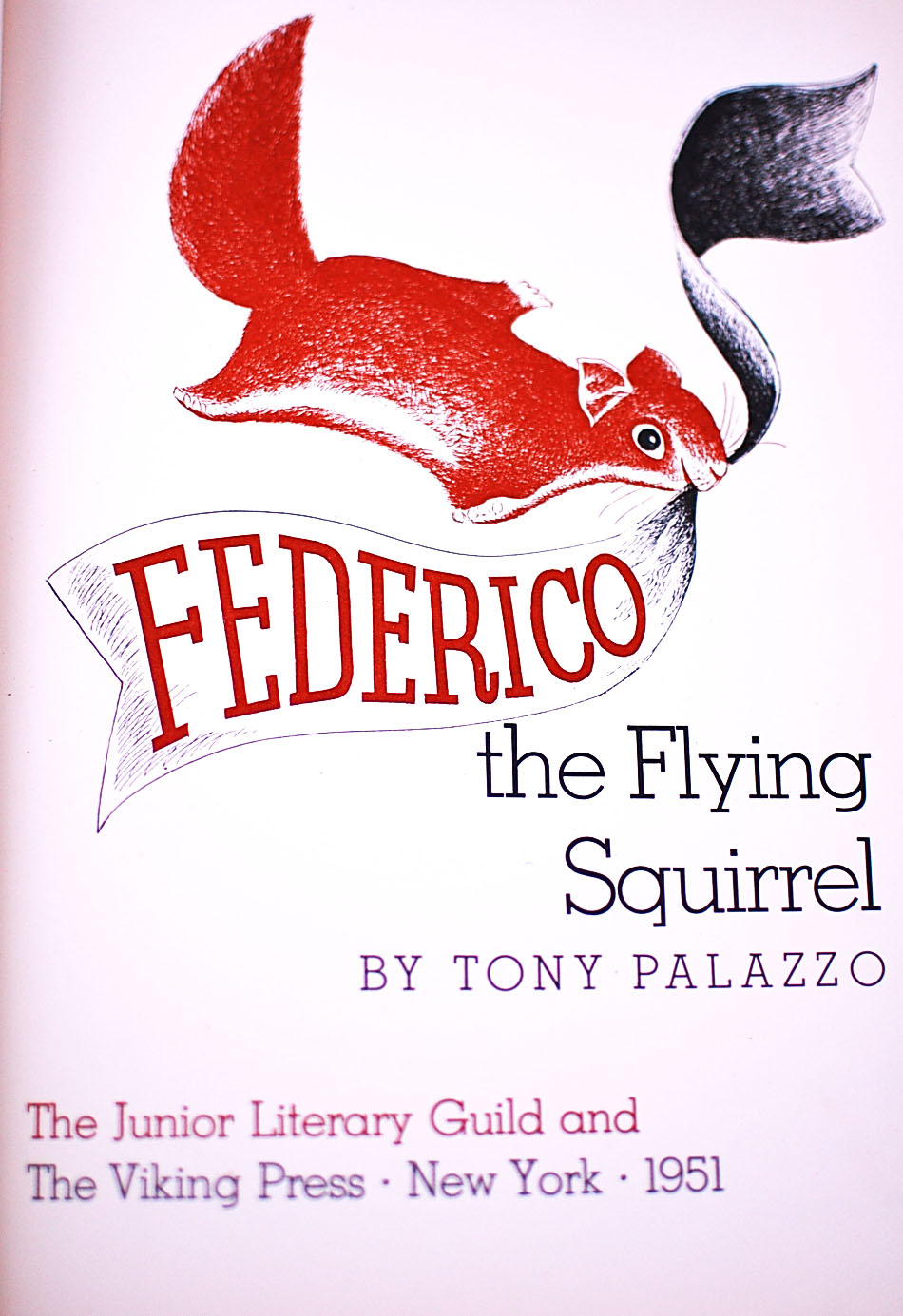 And speaking of eyes: Consider the giant liquid ojosof the title squirrel—these are the saucer eyes of an anime character! It’s on account of Federico’s eyes, and his game smile, that this book has been in heavy rotation at my house for the past four or so years. The little dude is irresistible. 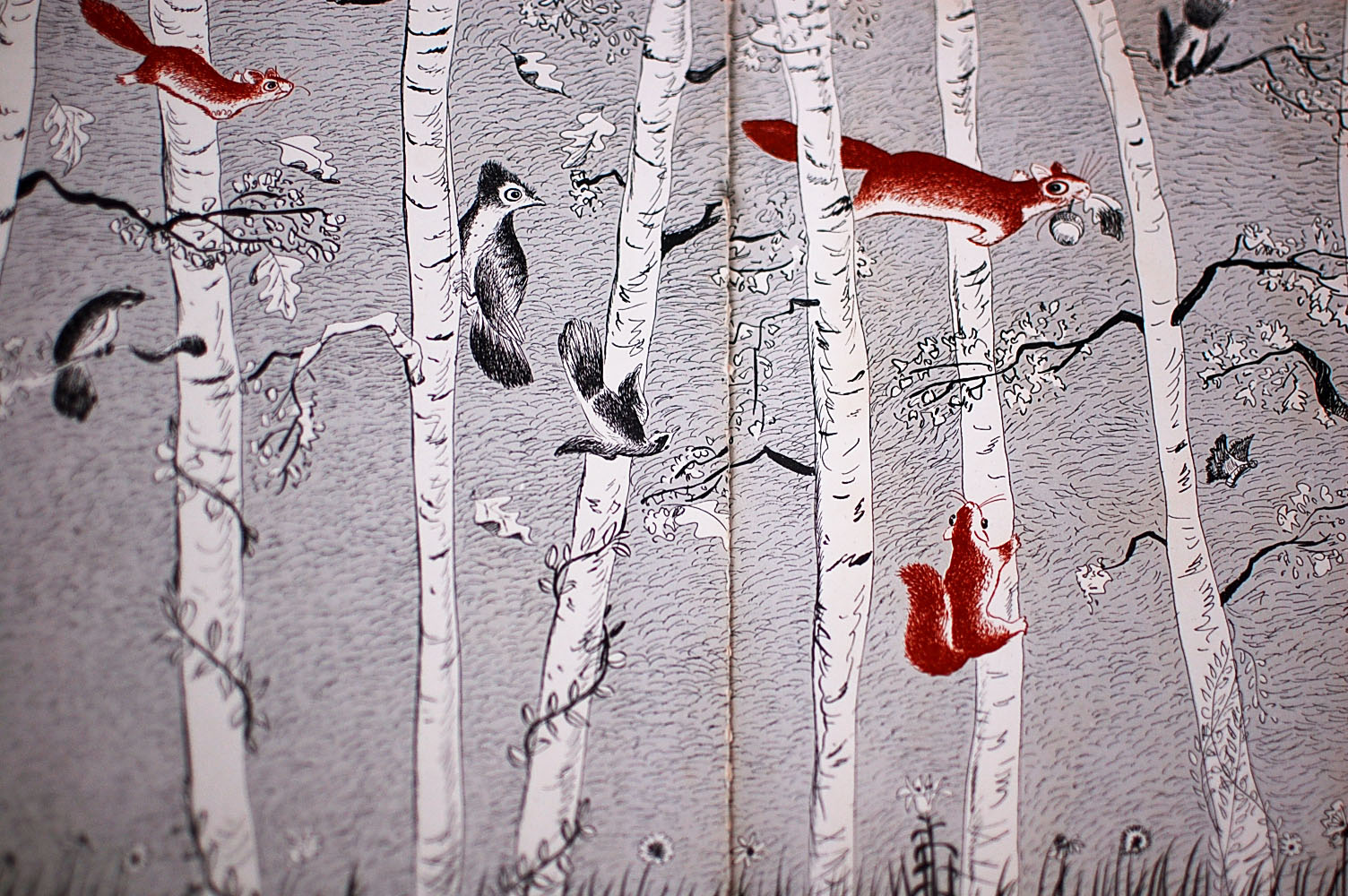 So we meet Federico, who is a very industrious, very confident flying squirrel. He shouts down a woodpecker squatter trying to move into his hole, feverishly collects nuts and still manages to find time to cavort with his flying squirrel posse:

Federico didn’t work all the time,

for he knew that all work and no play
makes a mighty dull day. As soon as
his chores were finished, he got up
a razzle-dazzle, try-and-catch-me game of flying tag with the neighborhood flying squirrels. 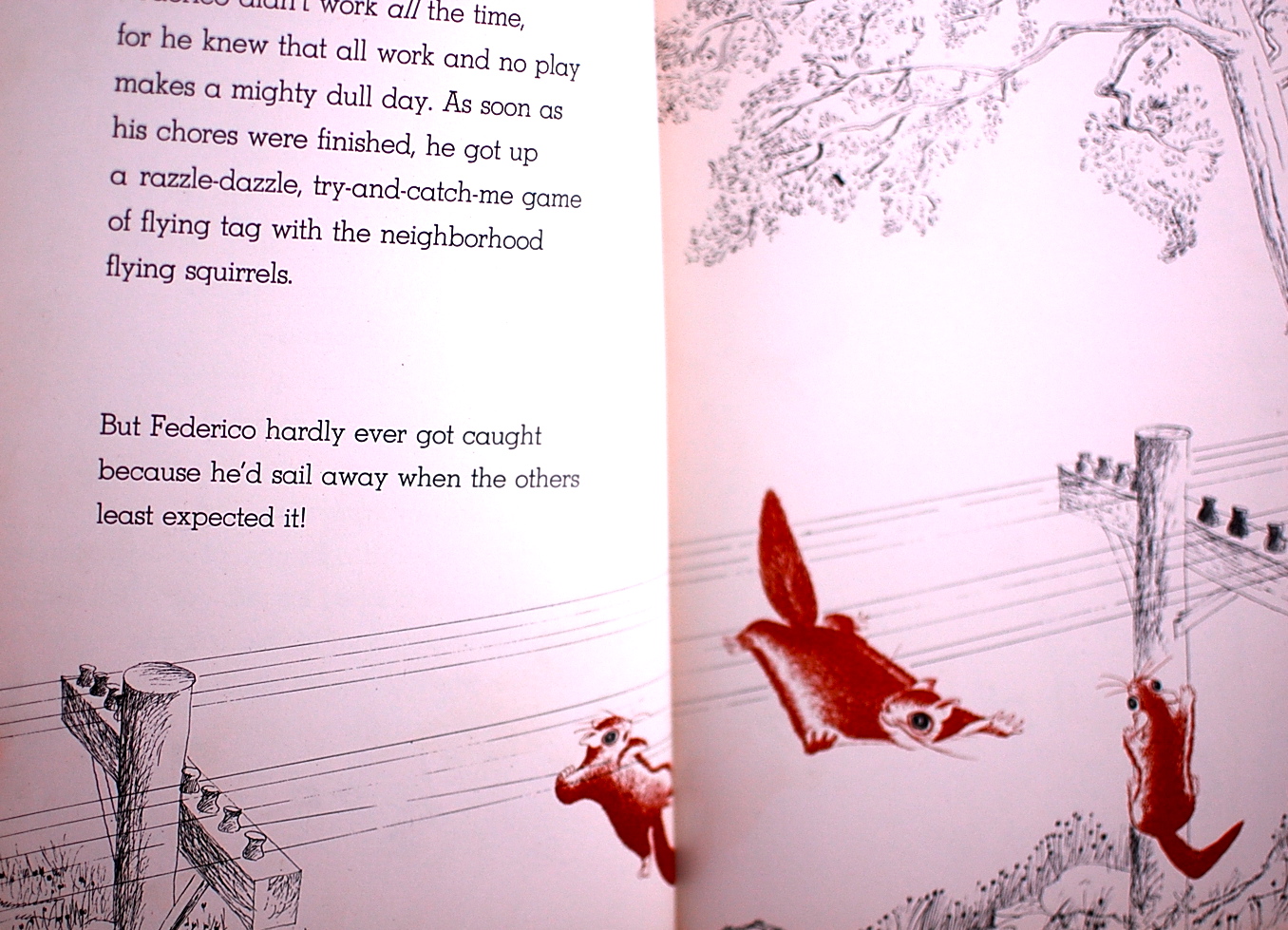 Federico clearly has a pretty perfect life, but he’s a teensy bit bored and always on the lookout for a new adventure, which he finally gets in the form of a neighbor boy named Billy.

Billy was holding some walnuts in his hand.
He was rattling them and calling to Federico
To come and get them!
Federico thought, “This is what I’ve been waiting for.” 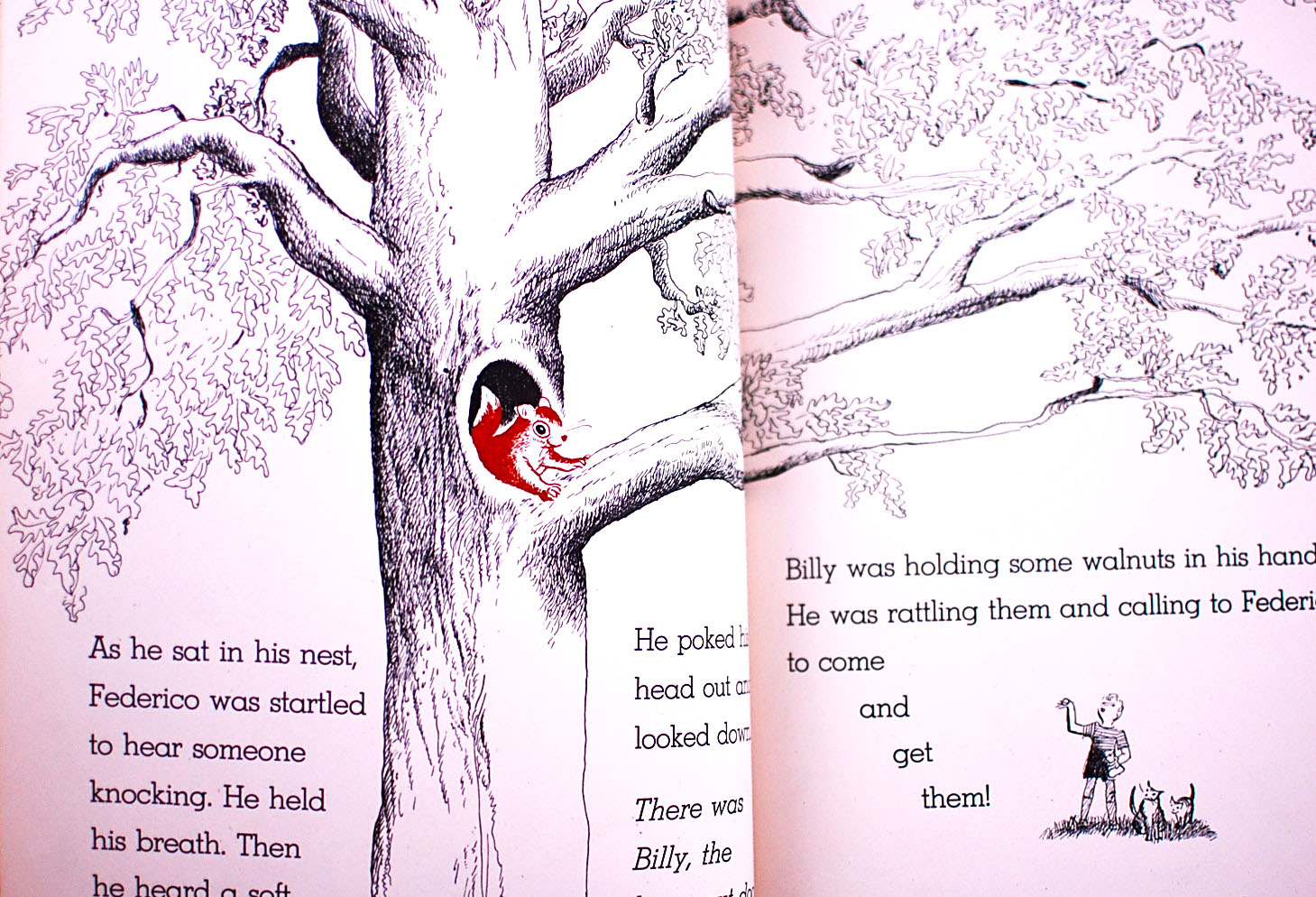 Before you know it, Federico and Billy are BFFs, while “Billy’s Cat” and “Billy’s Cat’s Kitten” look on benignly, their hunting instincts apparently vanquished by Federico’s ridiculous cuteness. Everything is peachy till one morning when Federico is awakened by a clamor too early in the morning for his taste: 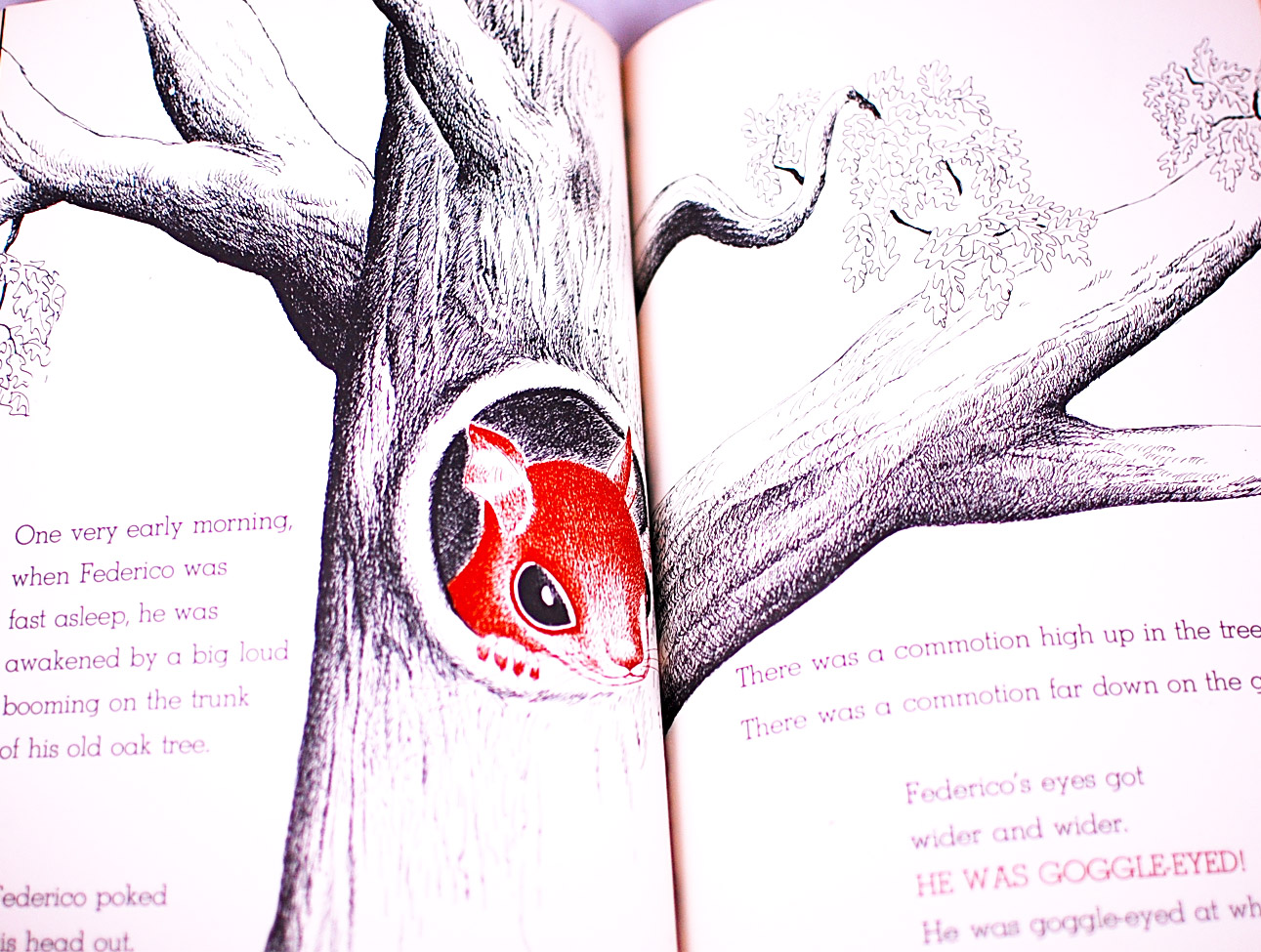 Which was Billy’s Cat’s Kitten stuck up in a tree, and too frightened to come down. As capable as any fireman, no-nonsense Federico is immediately on the case.  He leads the silly kitten down to safety, chattering instructions “in squirrel-chat the kitten could understand” and is proclaimed a hero by Billy.

“You should have a medal, like a brave soldier, Frederico,” said Billy.
“And from now on you shall have all the walnuts and peanuts you can store away in your nest up there!” Federico was very proud. 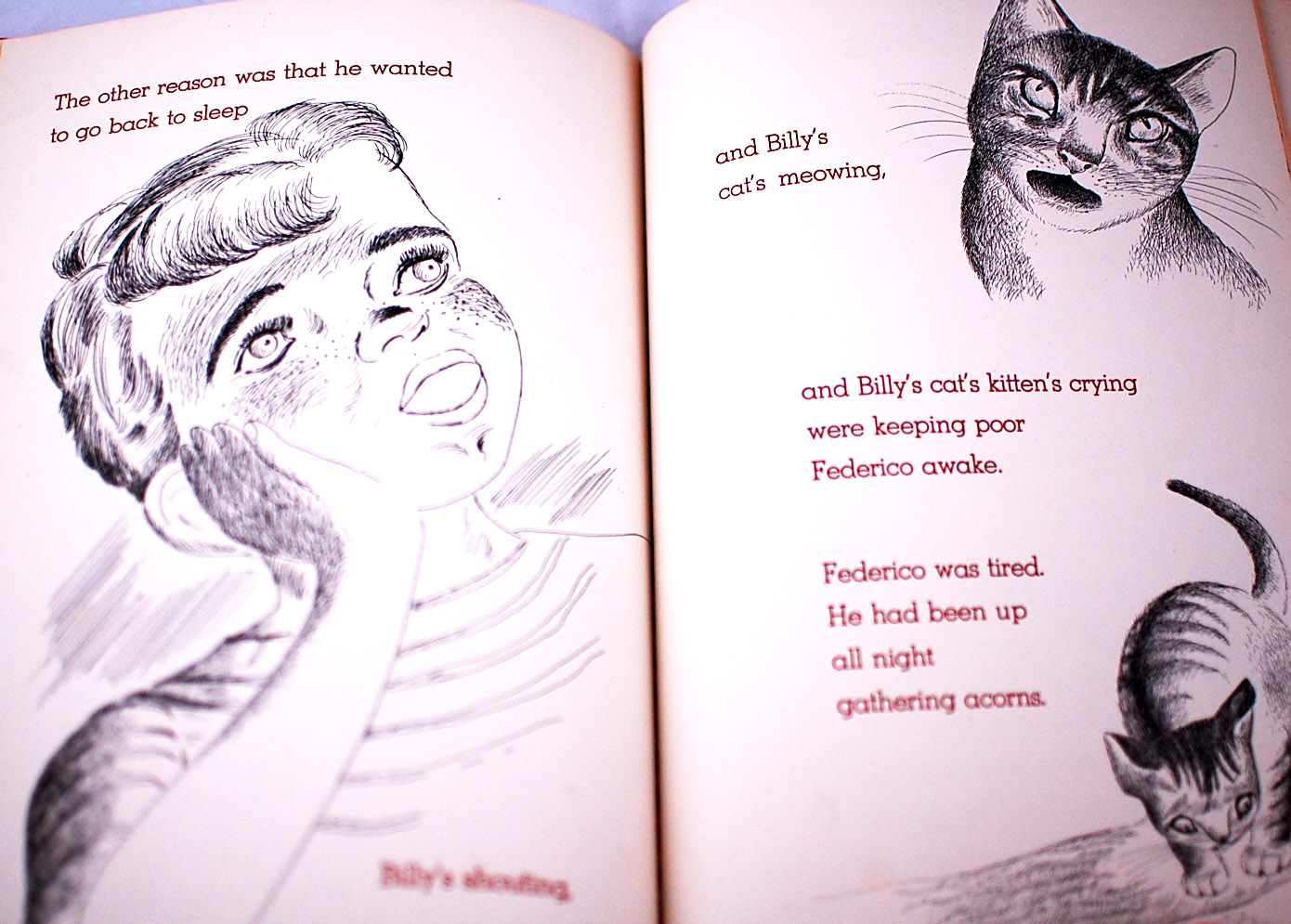 The only bummer about this book is that my edition—and I suspect a lot of vintage editions—is missing a page in the back that featured a flying squirrel pattern that you could cut out and assemble and then fly like a paper airplane. I didn’t even know until I stumbled across an intact edition online. Dang! But then I can’t really begrudge the original owner his/her fun, can I? 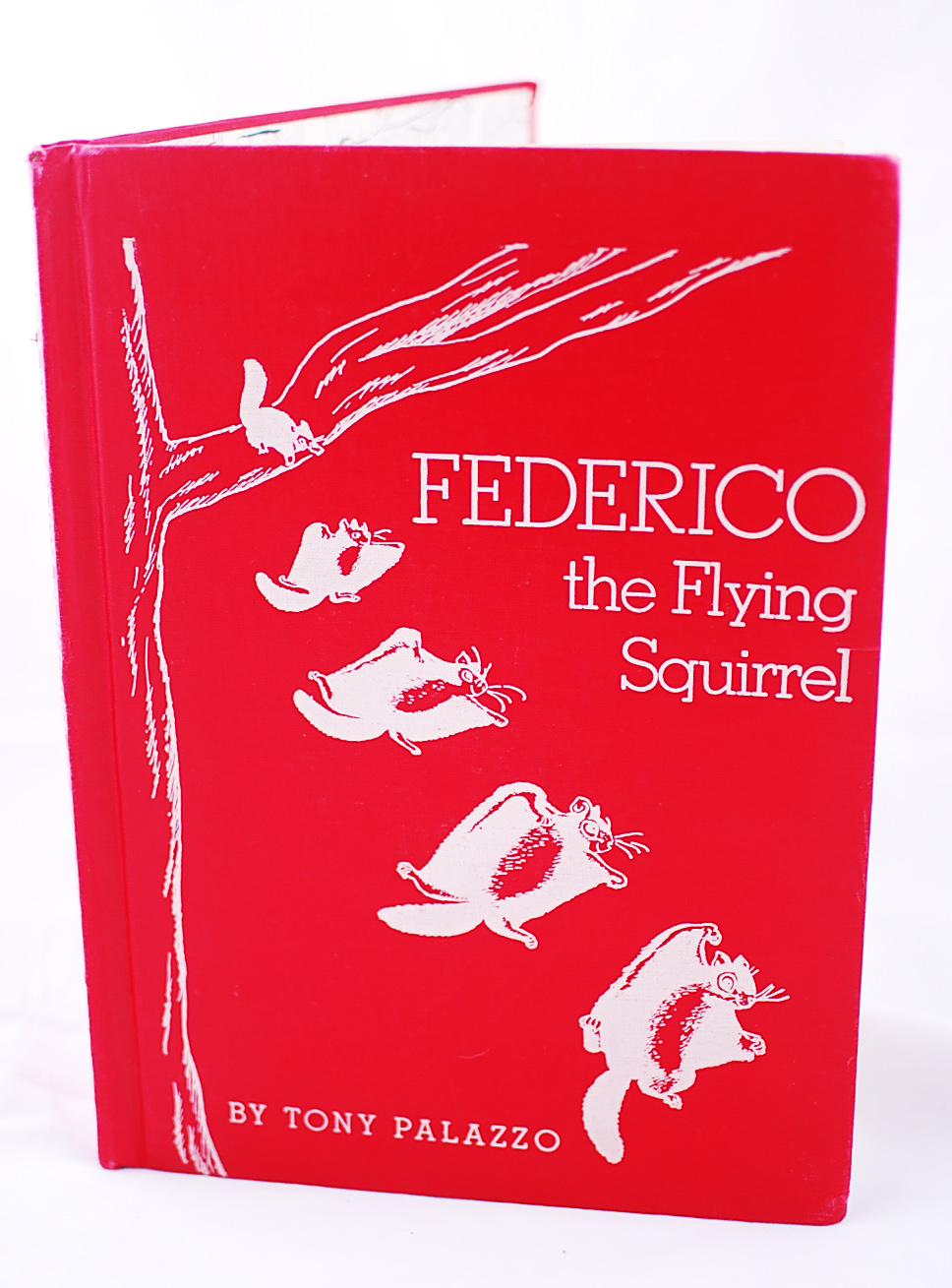