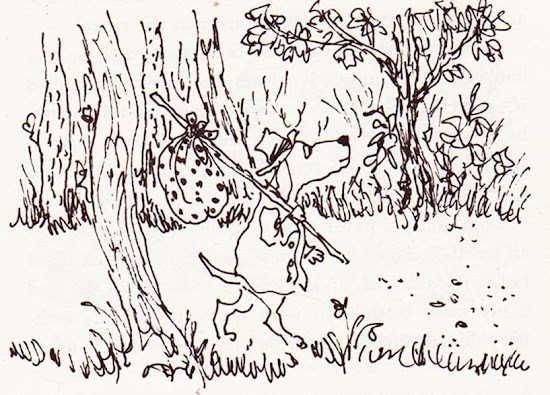 Today’s post is going to be about reading and dogs… 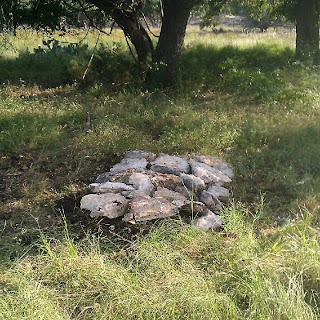 First off, we did end up putting Sugar down on Wednesday. We’ve been fighting cancer with him for a number of years, and having been through two surgeries to remove tumors, the one that began growing behind his eye a few weeks ago was simply too much for his precious body to bear. My husband took him out to rest at our farm, and although I’m heartbroken to lose a friend, I’m happy that he’s not suffering anymore and has a nice quiet forever spot among the oaks.

Secondly, being a massive reader and book person, you all know I’ve struggled with my expectations of the Spanish immersion program my son is in. The not reading in English until the third grade aspect of it has really freaked me out, and this year has been, not necessarily a struggle for him, but a real uphill battle in learning a new language which has translated into a minor reluctance to read on his part. Obviously the Spanish learning has sucked some of the fun out of reading for him, and I was beginning to lament all the age-appropriate classics he would miss in these years between.

Soooo, this year has been about reading books in Spanish (which up until a few weeks ago, he was able to read beautifully but still struggling as far as comprehension goes), getting read aloud all sorts of wonderful novels by yours truly, and continuing to read the sort of books in English that he read in kindergarten. I love Mo Willems, but really, how many times can you read the Elephant and Piggie books before your brain begins to tweak?

That said, last night we had a breakthrough. Apparently, this week the school librarian explained to his class about summer reading lists and all the contests that occur at various libraries and book stores regarding just that very thing. He was so jacked up about it that he made a chart right away, and sat and read ten books, both in Spanish and English without my even asking, and then he turned around and read me aloud the first quarter of Esio Trot (in English!) by Roald Dahl with relative ease. He genuinely seemed excited, as if a light switch went off in his head and all of a sudden he knew in his heart that he could read in English, and that he was actually pretty good at it, and even better still, he might even get rewarded for it…. with more books!

After Sugar died, my son and I spent that day talking about how much we loved him, and then I finishing off the night reading aloud the last few chapters of possibly the best children’s novel about a dog ever written, Dominic, one of only three middle grade works by famed New Yorker artist and children’s picture book ledgend, William Steig. (The other two being The Real Thief and Abel’s Island.)

Like most of his books, it’s the story of an adventure punctuated by a fair amount of magic and menacing animals. In Steig’s world, rabbits and donkeys and geese and pigs and dogs are always good and foxes and weasels and cats are always bad. Oh, and there is ALWAYS a witch.

Dominic was a lively one, always up to something. One day, more restless than usual, he decided there wasn’t enough going on in his own neighborhood to satisfy his need for adventure. He just had to get away.

And indeed he does. Shortly after setting off, he encounters a witch-alligator… 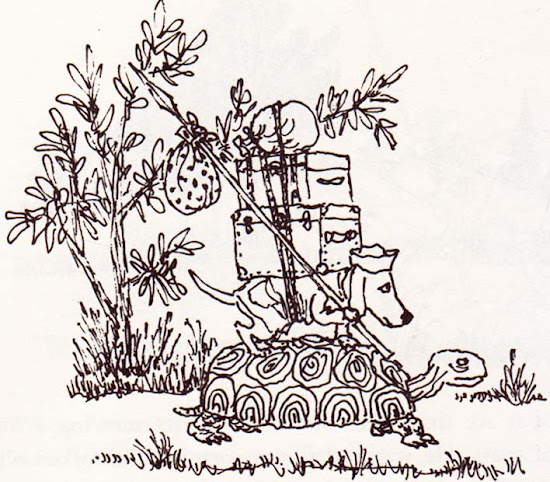 «And would you like to know your fortune?» the witch asked, adjusting the fringes of her shawl. «I can see the future just as clearly as I see the present and more clearly than I can recall the past. For twenty-five cents I’ll reveal your immediate prospects — what is in store for you during the next few days. For half a dollar I’ll describe the next full year of your life. For a dollar you can have your complete history, unexpurgated, from now to the finish.» 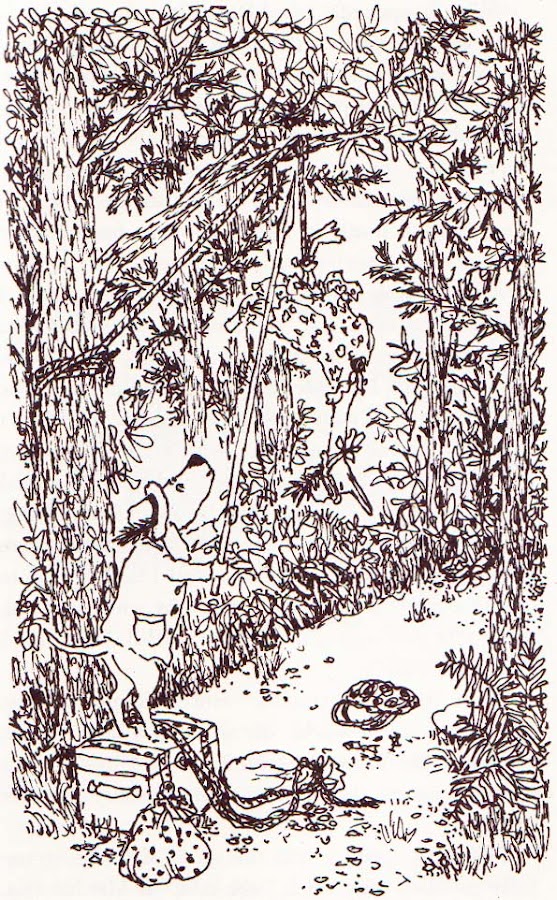 Who doesn’t love a dog with a bindle, right? What follows is the discovery of a fortuitous doll – a repeated crossing of paths with a dreadful Doomsday Gang that robbed, ravaged, cheated, attacked creatures at large and travelers especially, and did all sorts of damaging mischief – a treasure – some philanthropy – lots of new friends – a wedding and at last, true love. Steig’s brilliance shines on every page and every page is a gift… every end the beginning of a great new adventure.

For all the Sugars and Dominics in the world, wouldn’t it be lovely if that last sentiment were so? 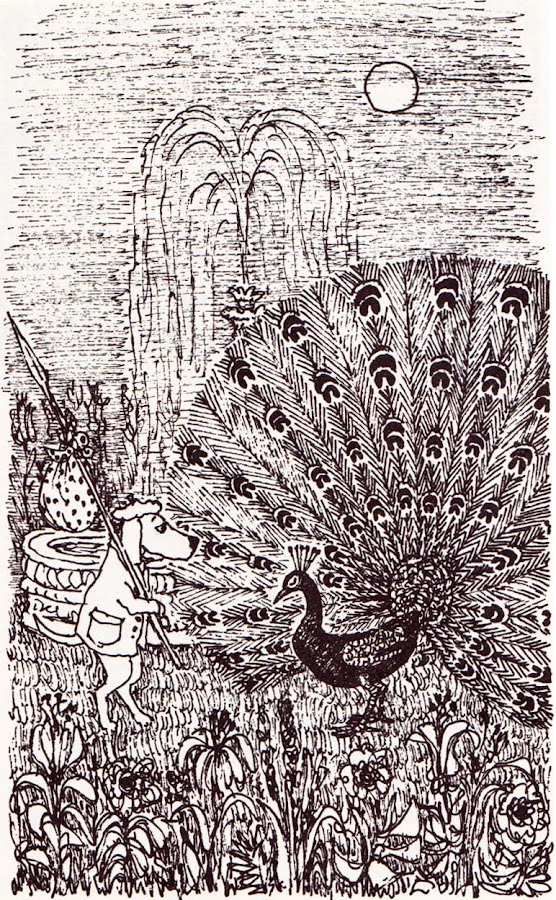 As the late, great Will Rogers once said: «If there are no dogs in Heaven, then when I die I want to go where they went.»

Wouldn’t it be nice… 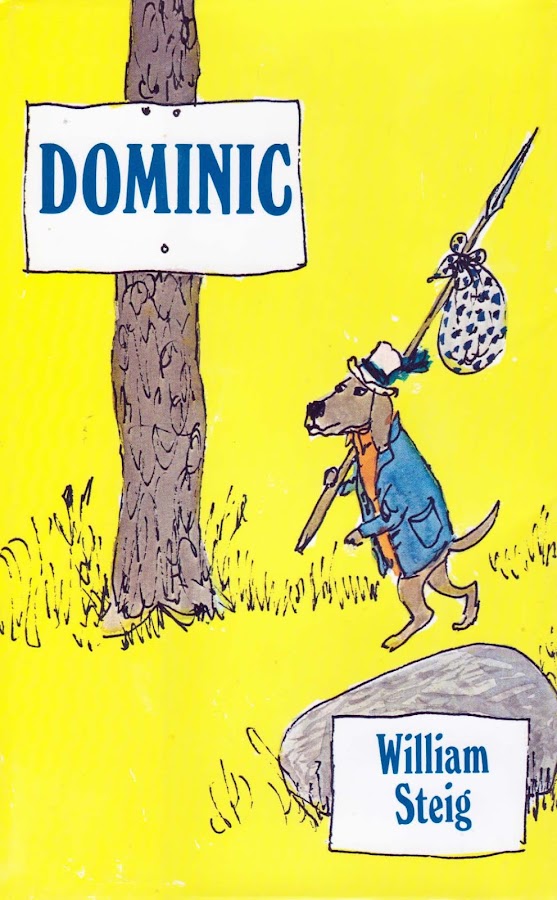